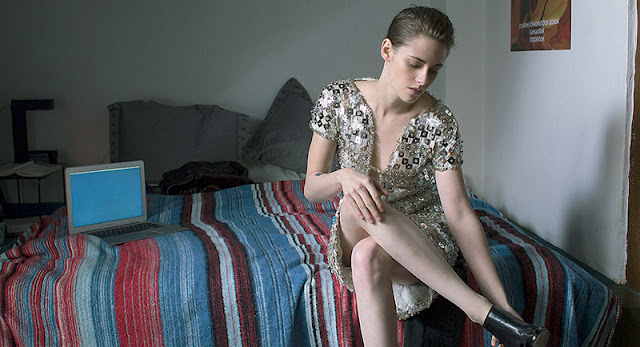 ( Source ) Last August, I was preparing to begin my first semester of my freshman year in university, and I went all out, watching as many movies as I could squeeze into my days. It was Summer Under the Stars on TCM, and I exclusively watched movies playing on the channel during that month, making a point to watch at least one film from each featured star. I considered trying that again this year, but I just wasn't as enthused by the selection of stars and films this year as I was in 2017--and more than that, I was feeling kind of burnt out this month and did not want to commit myself to any specific movie-watching challenges. The closest I came to that was getting a few 2017 releases out of the library and watching through them; this turned out to be a great decision, as most of my selections were excellent and I discovered some new favorites among those films I missed out on seeing last year. My classic film watching was less successful, and I watched a disproportionate nu
Post a Comment
Read more

The Sense of Discomfort in “Una” 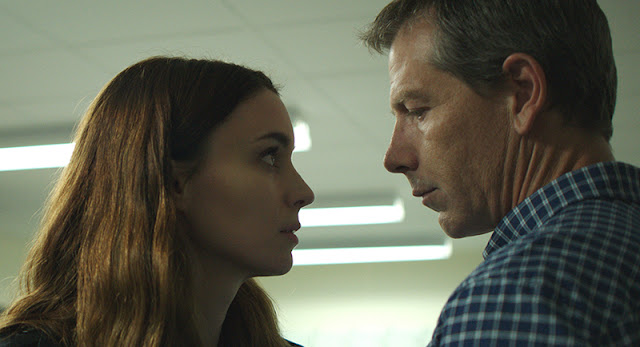 (image via Variety)             There is no question that most moviegoers watch movies to be entertained. Film has always been a medium of entertainment, and even critics are not immune to the pleasures of a day of escapism at the cinema; even the prestigious Sight and Sound lists, mainly comprised of challenging arthouse classics such as Au Hasard Balthazar and The Passion of Joan of Arc, makes room for such audience-pleasing works as Singin' in the Rain and Some Like It Hot . However, despite their challenging nature, Balthazar and Passion can also be considered pleasurable in their own ways, offering deeper insights into society and human nature through the tragedies they present. But what happens when both "entertaining" and "pleasurable" are replaced by “uncomfortable”? Can the quality of a film be diminished by the discomfort it evokes in the viewer? These are important questions in assessing the critical response to Una , a film that explores topics
Post a Comment
Read more

That Familiar Scorsese Touch in "Who's That Knocking at My Door?" 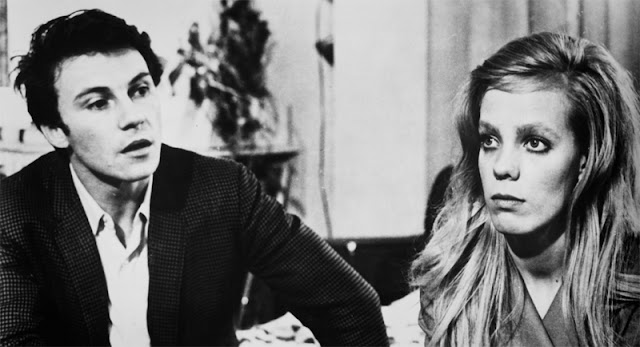 (image via IFC Center) Martin Scorsese’s Who’s That Knocking at My Door? is a film made by someone who loves films. This is no news to anyone today, but it is impossible to believe that anyone watching this directorial debut even back in 1968 could have mistaken this for anything else but the product of a man born and bred on film stock. The film itself is a minor effort in the grand scheme of Scorsese’s filmography, eclipsed by many later films that are more distinctly “Scorsese” and less broadly influenced by other filmmakers. However, it evidences the great confidence inherent in the works of this first generation of filmmakers who grew up going to the cinema, and it also begins to explore thematic material that would later become iconic in Scorsese’s distinct breed of filmmaking.             Shot in black-and-white at the time when color photography was widely being adopted, the film offers an appealing sense of nostalgia; it is a love letter to a style of filmmaking tha
Post a Comment
Read more 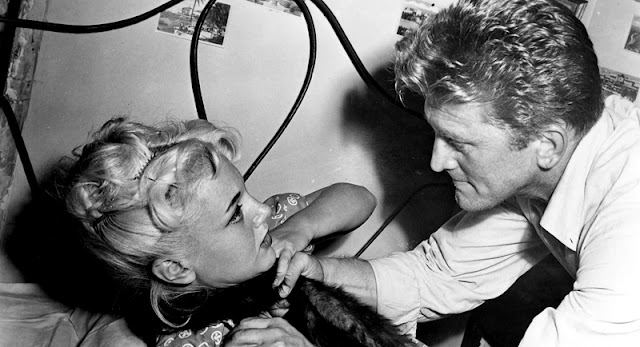 (image via The New York Times) Despite my continued lack of posting, I've actually been doing more writing in the past few weeks than I have all summer; somehow, I just cannot bring myself to actually go back and edit everything I have been writing and post it. Instead, I write these massive essays in a creative furor, sometimes staying up half of the night getting them done, and then abandon them to move onto something else. Hopefully in the future I actually work up the motivation--and the nerve--to get these pieces out there, but in the meantime, I'm at least keeping up with these recaps. July saw a whole bunch of first time viewings, as usual, but also a number of re-watches. Often I feel so overwhelmed by the number of films out there that I've yet to see that I neglect returning to old favorites, but when I finally do I remember that it's in re-watching that you really learn about a film and come to appreciate it; a single viewing is never enough. In particul
Post a Comment
Read more 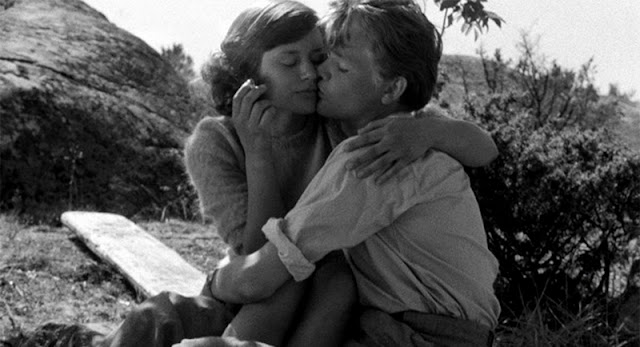 (image via Criterion) Midway through the summer, and my quest to purge my DVR of old recordings is still going strong. As always, I am impressed by the quality of the films that I have been allowing to sit un-watched for months on end; it makes for a potent reminder not to let them build up like that again. Over the course of the month I caught up on my Anthony Perkins films from when he was Star of the Month on TCM; I watched some really excellent films from 2017, including Game Night and Last Flag Flying , and the Pride Month triple feature of Thelma , Beach Rats , and God's Own Country ; I had a fantastic Noir double feature, Kiss of Death and Inferno , with Blu-rays that I blind-bought from Twilight Time; I saw Hereditary and Incredibles 2 in theaters, both great experiences in entirely different ways; and I discovered the films of Albert Brooks, a filmmaker who has immediately become one of my favorite directors. Read on to see the full list of films I watched, and a mor
Post a Comment
Read more 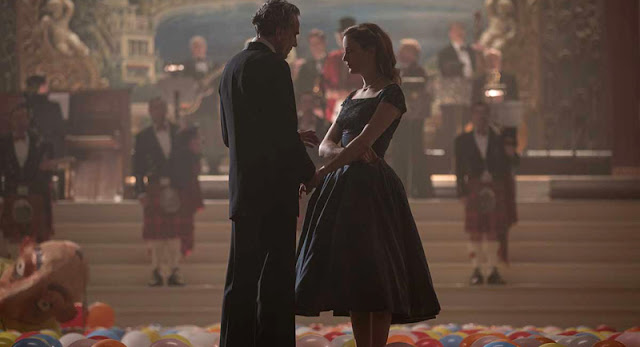 (image via The Playlist) May was the kind of month where I look back and think, hey, maybe I really do watch too many movies. I watched so much and to be honest, some of these films could have used more time for reflection than I gave them as I just kept moving on to the next thing. With that being said, this was also a month where I often went out of my comfort zone and really learned a lot a variety of filmmakers and styles of filmmaking that I was previously ignorant of. In particular, I watched a lot of documentaries this month, my supposed least favorite genre--and discovered that I just have not been watching the right documentaries, as is usually the case when I make broad statements about film genres or movements. I watched Monterey Pop, Gimme Shelter, and Dont Look Back , all incredible and engaging looks into the 60s rock scene; the adorable and informative Harold and Lillian: A Hollywood Love Story ; Icarus Film's 8-film DVD retrospective of Jean Rouch's work;
Post a Comment
Read more

The Troubled Youth of “La Haine” 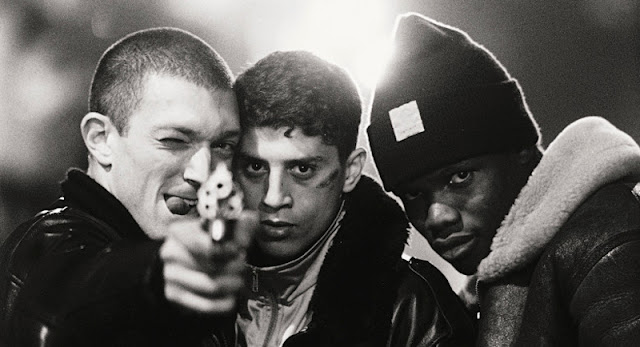 (image via The Guardian) The 1995 French film La Haine fits comfortably in the longstanding tradition of realist filmmaking in Europe, but it uses these traditional conventions to tell an entirely modern story, highlighting painful realities regarding the link between racism and violence in the late 20th-century. While La Haine's visual style evokes the stark, gritty black-and-white iconography made famous by the Italian neorealism movement in the 1940s and 50s, this stylistic decision is not merely an homage to European film history: it is a choice made for the express purpose of contrasting the characters with their environment, furthering the themes of the narrative through visual storytelling. The sparse black-and-white images initially appear to bring order and to assure an adherence to a "safe", classical style of filmmaking, but this sense of order is quickly dismissed as unattainable as the film's violent world is revealed. One visually notable scene see
Post a Comment
Read more
More posts